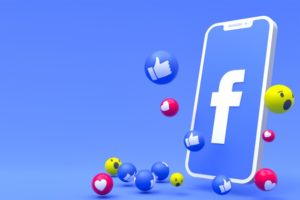 After holding unto 20% text on ads images rule, Facebook has finally kills this rule now.  The long standing rule has moved to more flexible one this week. It is going to be a big change for advertisers. This limitation has caused so many losses to ads buyers. Previously, advertisers were forbidden to use text more than 20% in images.

“Earlier this month, Facebook eliminated a rule that allowed only 20% of an image used for an ad to be covered with text. For years, any image used in a boost post or ad campaign could be tested with the Facebook Grid Tool, which would overlay a 5×5 grid on your photo. If five of the grid squares contained text, the ad wouldn’t be approved and you would have to try a different image for your ad. This requirement has been lifted, with important implications for advertisers.” – Mannix Marketing

This week,  some advertisers started receiving messages from facebook directly about the changed rule.

If text was found with over saturate ad copy it’ll never be published. It became real issue to army of Facebook advertisers.

Some started deploying means of counting text in images. To work by the rule.

As at 2016, Facebook brought an idea of Ok, Low, Medium and High scale text in image. But now, Facebook ads page will no longer automatically reject you advert if there is more space used up by text. –Openspaceadvertising
Facebook 20% text in image rule is no longer effective at this time. It came through messages sent to Ads buyers this month from Facebook.

Facebook has gained its popularity over the rest social media platform because of its many interactive features. One of them is Facebook ad, through this platform you can create advert for business campaign. This platform has supported publishers make reasonable revenue because of huge population active on Facebook.

Besides, its no longer news that about 2.7 billion people visit Facebook monthly.

In 2004, Facebook starts this ad project journey. But was called “Flyers“project. With aim to generates revenue through it.     Later, Co-founder Mark Zuckerberg and Eduardo Severin took another bold decision to monetize Facebook.   To help pay some administrative bills.   Then April the same year, Facebook began sales of ad space to entertainment industry movies precisely. Later  proceeded to  add fashion, job listing and schools offering admission.
However, 2014 brought evolution to facebook upgraded ad structure. Which were differentiated to Campaigns and Ads.

WHAT IS AD TEXT IMAGE

“Image text is any text that exists on your ad image or creative.” Facebook

According to Facebook:
Tips for avoiding too much text in your ad images
If you need to include text in your image, try using fewer words and/or reducing the font size of your text. Bear in mind that if your text is too small, it may be difficult to read.
“Make sure that most of the text that you use is in the body text instead of directly in the ad’s image.”Facebook 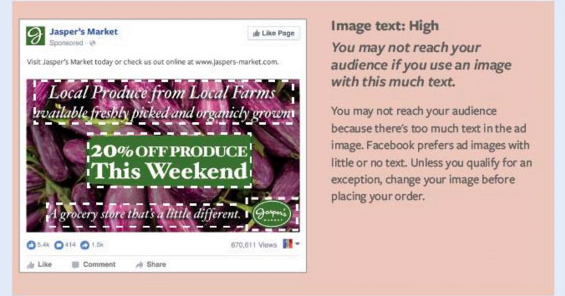 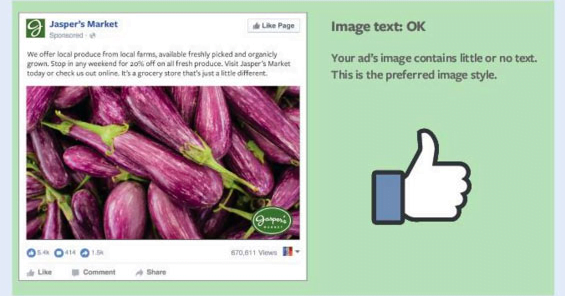 The said to create image ads that would appear on its space, advertisers should limit text in image to reduce more clusters on image. Best performing ads set will be images with less or no text. Though not every ads will be guided by this rule.

To limit the chances of being rejected by viewers. Ads displays user newsfeed are mostly image but when text overlays this it becomes annoying to viewers.  Because it’s all about viewers  and how they interact with ads campaigns. If the news feed covers bunch of too much overlays ads the performance will be low. Viewers will turn down the ads. For both parties benefit.

“To create a better experience for viewers and advertisers, ads that appear on Facebook, Instagram, and the Audience Network are screened based on the amount of image text used in your ad. Based on this review, advertisements with a higher percentage of image text may not be shown. Please note that exceptions may apply to certain ad images. For example, exemptions apply to book covers, album covers and product images.” Search engine journal 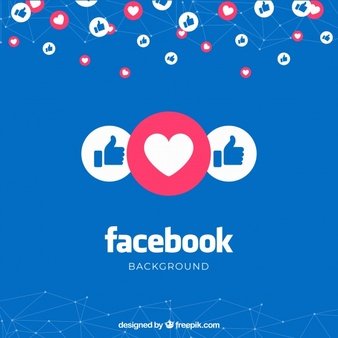 This 20% rule made many advertisers leaving Facebook ads, may be. Now, they have contacted advertisers directly relaxing the banned. That ads over 20% can’t experience Ban.

The news kills old rule and give freedom to publish text image restrictions ads. In all, caution is required to place less ads on image ads to reach more audience. Get result over investment. Now Facebook kills its 20% image text ads rule to help businesses advertise this period.
According to Facebook, “keep your text short, clear and concise in order to get your message across effectively “.

Conclusion:
Now advertisers have all the time to promote image ads. Not the former way again. But with exceed 20% text image ads rule. As this rule is beginning to loose its effect small business can do more text ads. Gain  more buyers over and over again. Target and re-target website visitors. Nobody knows if this new rule will be sustain.